One of the joys of living in the Northeast of Scotland today is the absence of sectarianism and bigotry. Although people may belong to a particular Church – or none – they all get on together.  Even at times of strife such as the 1840s, and throughout the rest of the 19th Century when, apart from the established Marnoch Church, there were in Aberchirder a Free Church, a United Presbyterian Church, an Episcopal Church, a Baptist Church, a Roman Catholic Church and a Church of Christ, there does not seem to have been much animosity between the members of the various congregations.

The Parish of Marnoch is named after St Marnan, a Celtic missionary from Ireland who settled on the banks of the River Deveron near what is now Bridge of Marnoch. 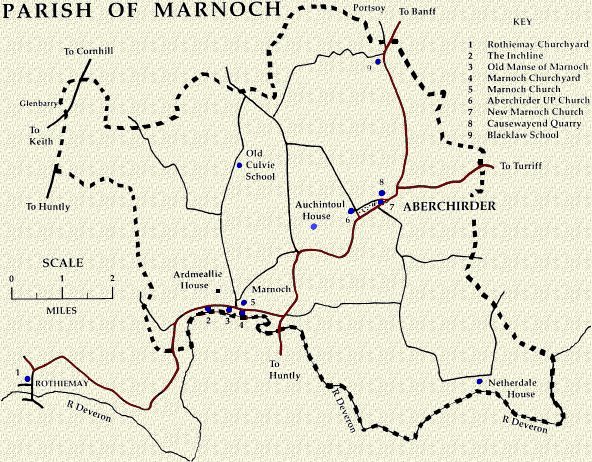 Since the time of St Marnan there was always a church in the churchyard beside the river and over the centuries it served in turn, Roman Catholics, Episcopalians and Presbyterians.  By the 1790s the church had become totally ruinous and in 1792 the Presbytery decided to build a new church close by on Cairnhill to escape from the smells of the kirkyard!  However, the gable end of the old church can still be seen in the kirkyard.
The Rev David Henry, writing his account of the Parish of Marnoch in June 1842 for the NSA (see box below) states that in 1831, local people raised funds to build a vault in the former church in which the bodies of the dead were laid for two months before being buried, after a grave was robbed, causing a great sensation in the parish.

In 1841 Marnoch hit the national headlines as the result of a bitter dispute over who should have the final say in selecting the minister for a Church of Scotland parish.

By the 1830s Church of Scotland members were split into Moderates, who accepted the right (under the 1712 Patronage Act passed by Parliament) of landowners to nominate ministers, and Evangelicals, who believed the congregation should have the final say.  The Evangelicals persuaded the General Assembly in 1834 to pass a Veto Act allowing a congregation to veto a minister they did not want – so church law contradicted secular law.

In Marnoch, the death of Rev William Stronach in 1837 meant that a new minister was required. The patrons (the trustees of the Earl of Fife) selected John Edwards, but the congregation preferred David Henry who had been Mr Stronach’s assistant in his last years.

After a long legal battle, members of Strathbogie Presbytery appeared at Old Marnoch on 21 January 1841 to induct Mr Edwards.

The dispute had attracted national attention, and a large crowd gathered at the Manse of Marnoch despite having to overcome deep snowdrifts which prevented all but one Aberdeen stagecoach reaching Turriff, from where a carriage with four horse had taken several hours to travel the eight miles to Aberchirder.

Early in the proceedings all but one parishioner walked out.

The Aberdeen Banner, an Evangelical newspaper, described the scene thus:
Old men with heads as white as the snow that lay deep on their native hills, the middle aged, and the young…went out into the wilderness…many in tears and all in grief.

Thereafter a crowd of protestors who had come from all around began a riot in the church.

The Banner reporter noted that, as he re-entered the church:
Several people were employed in throwing snow, pieces of bread and copper coins at the members of the Presbytery.

The riot was eventually quelled by Mr Stronach of neighbouring Ardmeallie House and Mr Edwards was inducted.

An eye-witness account the intrusion was noted in a letter from John Paterson to his brother Walter who had emigrated to Australia in 1838.
This has been submitted by Lorraine Threadgold, South Australia and transcribed from the original letter posted at Aberchirder by John Paterson to his brother, Walter, in Mt. Barker South Australia in 1841.  The original is still in the possession of his Great Grandson C. J. P. Hedges.
I shall give some account of the Marnoch proceedings concerning John Edwards the majority of the presbytery carried him [as] one against the will of the parish they all dissented from him but one and took him on his trials and was going to place him but the whole seven has been suspended one year and one half but they have got on with the placing of him by the court of Session in January and it was a day that I never saw the like of about eleven o’clock they commenced at the manse of Marnoch and from that to the church and the parishioners was ordered to come to the low church and the strangers to the loft and it was filled to excess and one of the beams sprang about one foot and the crowd dismissed and it sprang back but there was no ill done and the seven suspended ministers commenced to place him but the parishioners protested against their proceedings and left the church and beat them at their breasts and Thompson of Keith proceeded to the pulpit but was held back by the mob and there was a very roch church for about three hours and they were roaring in the loft and hissing down on the minister snowballs were thrown from all directions upon Edwards and rest of his brethren but the police and the magistrates got peace made in a hurry and they got on with placing of him and he has been preacher ‘till now but he is up to the general assembly and we suppose now will preach no more but we shall wait until next week and give full account with newspaper Mr Henry has been preaching at the Incheline every sabbath morning and in Fogieloan in the afternoon and there has been great collections through all Scotland and England and Ireland and America and all the way from the Cape of Good Hope to build a church to them there was three hundred pounds collected in Aberdeen in one day and four in Edinburgh and they are getting on with the building of it but they are expecting to get there once again but if the Court of Session interferes once again there will be an uproar that the like has not been this 200 years before the members are allowed to make their right good no more at present but remain
your brother John Paterson

Amazingly within 26 months the breakaway congregation had raised over £3000 from a Scotland-wide appeal, enough to build a new church and manse at the east end of Main Street in Aberchirder.

This dispute at Marnoch led directly to the national Disruption when the Evangelicals left the 1843 General Assembly of the Church of Scotland and set up the Free Church – of which New Marnoch Church became a member.

The Evangelicals signing their demission from the Church in 1843

After the Jacobite Rebellions of 1715 and 1745, when Episcopalians had tended to support the Stuarts, the Government had passed laws banning Episcopalians from gathering in any numbers for worship.  These laws were repealed in 1792, and gradually new churches were constructed, including the one at the top of Main Street in Aberchirder in 1824, the first in this area.

Today just two of all these churches are in regular use – New Marnoch and St Marnan’s.  Old Marnoch can still be visited by appointment and is occasionally used for weddings.

written by our Historian Bob Peden

You can purchase this book by contacting us or through our Gift Shop on this web site.