To carry out its responsibilities the Town Council had to have a number of employees, whose job specifications were altered from time to time:

Burgh Workman:
A man of many parts, whose duties in 1908 included being Burgh Surveyor (in charge of public health and sewage) roadman, skaffie (jn charge of cleaning streets and clearing cesspools), lamplighter and slaughterhouse inspector as well as being in charge of the fire engine.

Burgh Inspector of Weights and Measures:
A less onerous job, ensuring that customers got full measure.

Medical Officer of Health:
Dr Whitton was appointed but resigned to become Provost and was followed by Dr Moir, but from 1910 the Banff County Council MOH, Dr Ledingham, took on responsibility for Aberchirder.

Public Analyst:
Checking of foodstuffs was also carried out by the County one

Town Council Office
The minutes of the Town Council do not record where its meetings were held. The most likely location is the office at 17 The Square which over the years is recorded as being owned by the proprietor of either the house at No.16 or the bakery at No.18. The office was occupied by the inspector of the poor until 1914 and thereafter by the Parish Council of Marnoch until 1930, when it became the public assistance office. (The 2015 photograph below shows the house at No.16, the former office at No.17, and part of No.18, operating as a Chinese takeaway.)
In 1933 Frank Anderson inherited the house and shop at 132 Main Street from his father, also Frank, a tailor and clothier. He had been a councillor from 1894 to 1902.
Frank was appointed the following year as Town Clerk, a post he held until he retired in 1964. The property was bought three years later and the Town Council continued to use the office for a further two years, then moved to120 Main Street, which had been a Banff County Council Office since 1940. After local government reorganization the property continued to be used by Banff & Buchan District Council from 1975 until 1987, when it was bought by Marnoch Church and became a Thrift Shop. 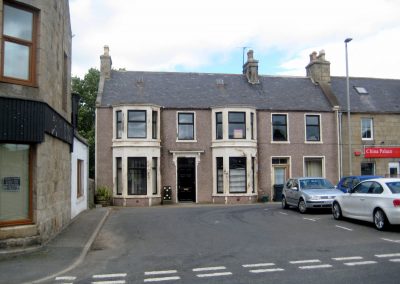 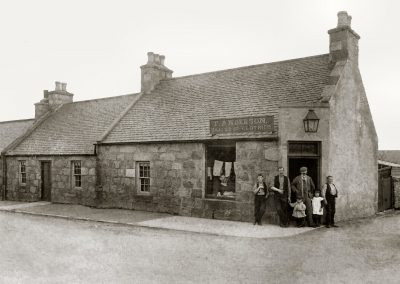 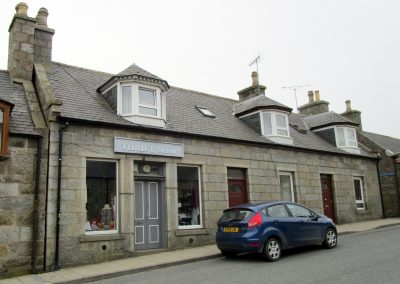