By the 1960s, big changes began to take place as increasing prosperity meant more people could afford to buy mass-produced cars giving them control over their travel arrangements. This led to hard times for rural railways and bus services, and, by the end of the 1960s most rural branch railway lines had closed under the ‘Beeching Axe’. Bus services off the trunk roads began to depend on small local companies whose main business was transporting school pupils and private hire work.

In Aberchirder, William Webster (Badger) had bought over Hay’s buses in the early 1950s and ran them till they were no longer serviceable. Meanwhile Hans Hardie, who had run a taxi business since 1938, from what had been Charles Buchan’s motor garage at the top of Main Street, began to run buses in 1964, continuing until 1994 when the firm sold out to Bluebird.
Stagecoach Bluebird, a trading name of Bluebird Buses Ltd., continued operating in the northeast of Scotland covering Aberdeenshire, Moray, Angus and Aberdeen city services.
These pictures show:
– Cars parked in the Square in the 1950s. – note the trees and bus shelter.
– A Hardie’s coach parked at the harbour at Burghead, where Sunday School picnics went in the 1960s.
– The entire fleet of Hardie’s buses parked in the Square on their last day in business, 1994.
(Picture courtesy of Hilda Esslemont) 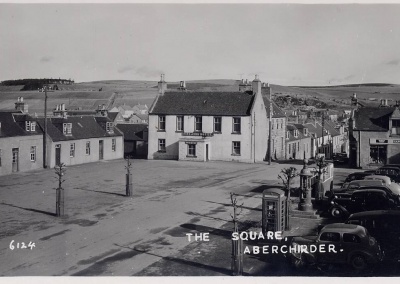 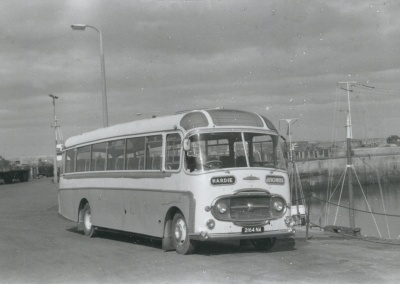 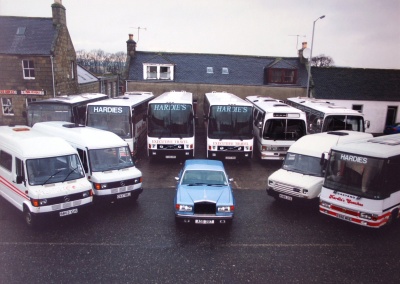 As in many parts of rural Scotland, it has become increasingly difficult to travel by public transport from Aberchirder to other towns in the North-east, as mass motoring has meant that buses cannot carry enough passengers to make services viable, and most services have to be heavily subsidised by Aberdeenshire Council.
This means that families without access to private transport are severely disadvantaged in terms of not only leisure, but access to shops and services such as hospitals.

Hardie minibuses (1993 registration) parked outside the garage at the top of Main Street. 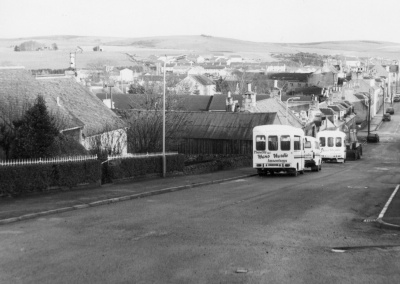 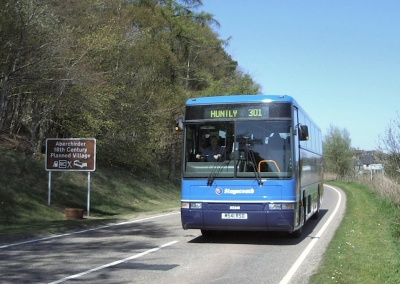 A Stagecoach Bluebird bus heading past Cleanhill towards Huntly, 2006