In 1943, as World War Two continued, the Government was already looking forward to a resumption of its prewar drive to improve the nation’s housing stock. Discussions between the Town Council and Department of Health focussed on the feus at what were then 29-31 and 37-39 South Street.
The Town Council decided that the whole feus, back to the Long Lane, should be acquired, and the Department of Health stipulated that additional access to the A97 road should not to be created, in line with Ministry of Transport policy.
A report the following year detailed the properties the Town Council wanted to buy:
29/31 South St (Adam Michie): House fronting South Street in poor condition and behind is an old row of one-storey & attic cottages now occupied as one house. This house is in a poor condition and is not well kept. The garden behind is in a neglected state. Fronting Long Lane at the rear is an L-shaped range of buildings comprising cart shed, stable and byres in a fair state of repair externally. District Valuer proposes offer of £200 for whole property, with entry by 15 May 1946.
37 South St (Mrs Isabella Bell): One old one-storey & attic detached cottage, with shed adjoining. Back of feu let as garden. District Valuer offer £65.
39 South St (Mrs M Anderson) – fronting South St is an empty and condemned cottage, other buildings are stable, cart shed, two sheds. District Valuer values at £100, entry by 15 May 1946.
The Department of Health agreed to these terms, made a loan available and provided a list of standard plans from which the Council could select.
Eventually, with the agreement of Adam Michie’s son, in Canada, the Council’s offer of £200 for Nos.29-31 was accepted, with the tenants Adam and Helen Michie to be found alternative accommodation. Adam insisted he got the roof timbers and materials of the steadings to be demolished and this was agreed in order to make sure he left!
While the South Street scheme was developing, sites became available during 1946 at 115-125 North Street and the Department of Health agreed to two further houses (115 & 117) being built on these sites. (Nos.123 &125 were not demolished and replaced until 1980.)

Mr Mackie, Aberdeen architect, produced plans and with the Town Council having borrowed £22000, construction of the twelve houses in South Street and two in North Street was begun by Don Contractors, Inverurie. Progress was slow and it was only in mid-1950 that the first tenants could move in. 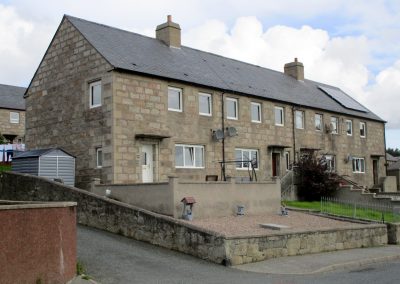 Although housing conditions were improving for a growing number of people, the new houses were short on facilities by today’s standards. Mains electricity had reached Aberchirder just before Christmas 1936, and by 1941 some tenants of the 1919 Scheme and 51-52 South Street had paid 5% of the cost to be connected. However it was only after World War Two that electricity began to be installed in the remaining Council houses for lighting, heating and cooking, and all the South Street tenants had to wait until 1949.
By 1948 the Council had to increase the rents of existing council houses to match what would have to be charged for ones in the Cruden and 1946 Schemes now underway. In addition heavy repair costs had exhausted the repairs fund. Annual rents including electricity charge would range from £12.10s to £22.10s, depending on the number of apartments.

South Street renumbering:
Town Council minutes for 1950 noted that “In view of the recent new houses erected at South Street and Long Lane…the present position must be giving cause for complaint by postmen.” It was therefore agreed to rename the whole of Long Lane as Southview Terrace and to renumber South Street. At this point several houses previously included in South Street numbering between 28 and 36A were reallocated to Southview Terrace (10 – 17). (A further renumbering of Southview Terrace took place in 1966.) At the same time the numbering of the west end of South Street was also altered to provide numbers for Househill and Hillcrest.
While these changes made life easier for postmen, it created problems for the poor historian trying to use property records and Town Council minutes to track developments in housing!

The first prefabs – Cruden houses, 1 -19 Wellfield Terrace (1949):
At the same time as the South Street and North Street programme the Town Council embarked on another project which involved building a new kind of house on a greenfield site.
After the war local authorities all over Britain turned to prefabricated houses as a cheap way of providing large numbers of homes to replace properties either damaged in the war or unfit for human habitation. The Government oversaw the building of prefabs which were intended to last for only 10 or 15 years.
This was followed by the construction of what were intended to be permanent prefabs with an expected life of sixty years. From 1945 to 1955, 1.5 million homes were completed and the percentage of people renting from local authorities rose from 10% in 1938 to 26% in 1961.
In 1946 Aberchirder Town Council agreed to accept an offer from the Department of Health of an allocation of ten houses produced by the Scottish company Cruden Homes. The Council bought land at what was referred to as “Corskie Brae” and by the end of the year A J Hall, Aberdeen, were ready to begin building, east from the old fire station along the back of the feus on the north side of North Street. The dead end lanes from North Street, which people had used for various purposes including poultry runs, were now opened up onto the new street, to be named Wellfield Terrace, a reference to the old bleaching green at the Back Spoot well.
It was agreed to install open coal fires with back boilers, but electricity was to be installed by Grampian Electricity Supply Company to allow tenants to have electric cookers if they wished. To save money, the houses had been built in pairs, with 2 blocks of 4 and 1 block of 2. The tenants had hardly moved in, in late 1949, when complaints about their new houses began, many of them caused by the ‘back-to-back’ layout of the fireplaces which were slow to heat and gave out smoke and soot. The contractor agreed to replace all the grates at their own expense and to fit an electric cooker and tiled grate with boiler. At the same time the flimsy roofs, which had not stood up to the winter weather, had to be replaced, but continued to leak.
In 1951 Burgh Architect Mr Meldrum submitted a report listing complaints about faults, including metal window frames badly fitted to masonry and so leaking, and canopies drawing water into the main walls. Repairs were carried out, but this was not the end of the problems with the Cruden houses, as roofs had to be reslated in 1956, with a further round of major refurbishment in 1968.

In 1951 Burgh Architect Mr Meldrum submitted a report listing complaints about faults, including metal window frames badly fitted to masonry and so leaking, and canopies drawing water into the main walls. Repairs were carried out, but this was not the end of the problems with the Cruden houses, as roofs had to be reslated in 1956, with a further round of major refurbishment in 1968. 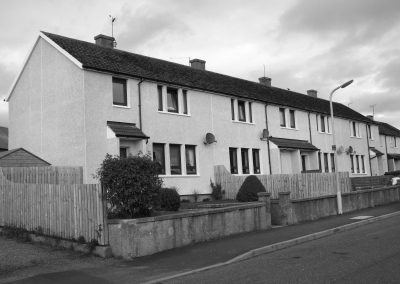 With the Cruden houses built, the next Town Council project involved building ten 3-apartmentt houses on land behind Wellfield Terrace, which would involve extending the burgh boundary. In 1951 Architect Mr Meldrum drew up plans and tenders were invited, but it was decided not to proceed in view of increased costs and loan charges.
Three years later a revised layout was produced on the proposal of Provost Smith and the contract awarded to L A Anderson. Electricity was installed, for the houses and street lighting, and an additional septic tank built to supplement the one at Wellfield Terrace. Total borrowing by the Council was around £16000. By 1956 the first tenants had moved into their new homes, with a rent of £40 a year, in what had been named Smith Crescent.

During the 1950s, the Hull construction firm of R.G. Tarran, builder of the Tarran Prefab, adapted the former dyeworks of Pullars of Perth to produce the Dorran house, a single-storey bungalow built from precast panels. At the time, the big attraction was the relatively large internal spaces that they provided. They sold to the public sector with houses for the Forestry Commission in outlying parts of the Highlands and small developments of social housing in rural counties. Dorran Construction later offered a range of bungalows to private buyers and a total of 2500 had been erected by 1962.
Not surprisingly, given the problems of the Cruden houses, the Town Council had decided in 1951 to have no further non-traditional housing. However, in 1956 the Sanitary Inspector produced a list of thirty properties he considered unfit for human habitation and closure orders were issued. The houses included 1 Market Park, 7, 9 &11 Market Street and 51 & 53 North Street and the following year a representative from Dorran approached the Town Council to propose their houses should be used to replace the existing ones. After a visit to Carron in Morayshire to inspect examples, it was decided to build six bungalows on the double feu at the Market Street site. After discussion the Department of Health gave approval for five 3-apartment houses at a total estimated cost of £8400 as per tenders submitted. All tenants had moved in by 1959 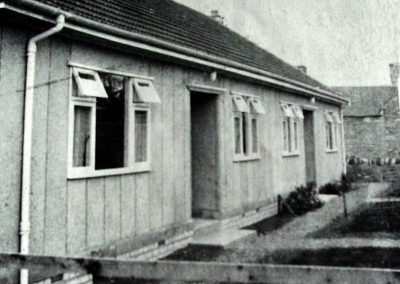 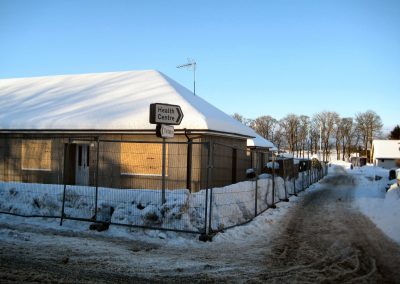 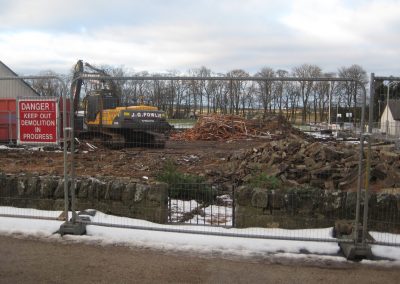 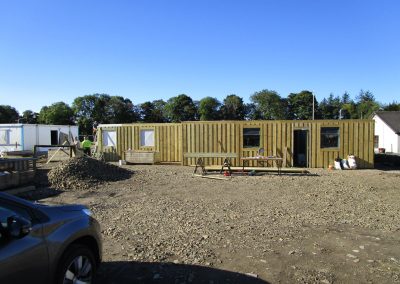 Problems did not appear as quickly as with the Cruden houses, but within twenty years tenants were complaining that they were difficult to heat, the windows were draughty and subject to condensation, and some had problems with damp or mould growth on or in walls. Most of these faults arose from the original design, with its lack of loft insulation, single glazing, and open coal fire. By 2010 Aberdeenshire Council decided that the cost of upgrading the houses to the latest standards was too great and demolished them. Seven years later the vacant site was leased from the Council by Aberchirder Men’s Shed to construct premises and by the Community Association to create a community garden.