Much of the late 19th Century change in Aberchirder’s housing was due to it becoming a police burgh complete with Provost and councillors in charge of many aspects of local life, including paving, cleansing and lighting streets, distributing water and dealing with sewage.

Water:
The “plentiful supply of water” mentioned in Alexander Gordon’s 1764 advertisement consisted of wells dug to provide spring water. There were three public ones which can still be seen today – the Bruchal or Bruckle (later misspelt by mapmakers as Bronchal) at the west end of North Street, Back Spoot at the top of School Lane, and Little Haven below South Street. In addition to providing a water supply they were surrounded by well greens where women washed and bleached their laundry until well into the 20th Century. However Charlie Anderson recalls that in the 1930s the ‘wally green’ at the Back Spoot was used as a football kickabout area.
The first two of these wells are shown on the 1823 map of Aberchirder: 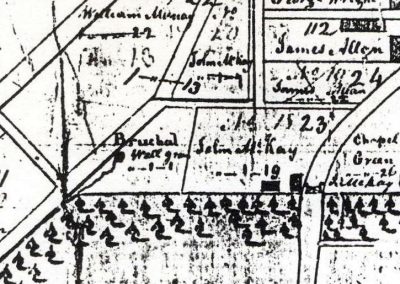 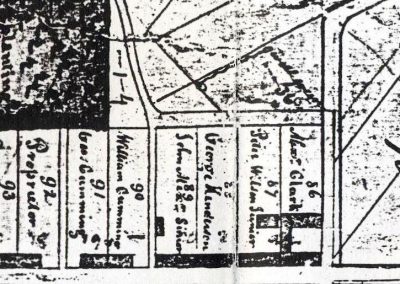 And all three are marked on the 1904 OS map, of which these extracts show two: 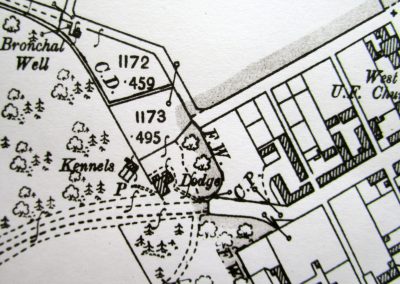 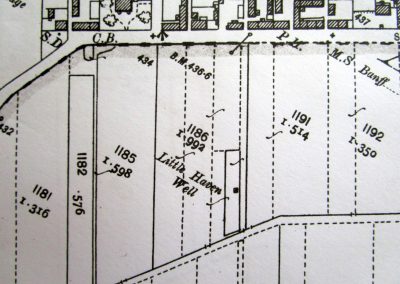 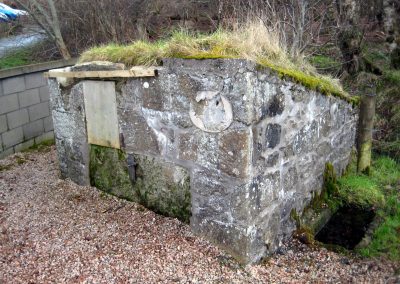 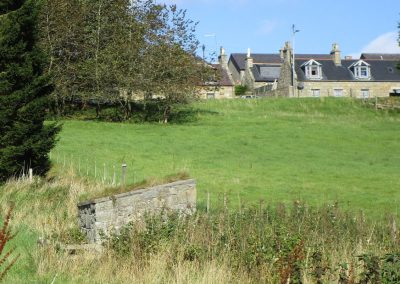 However by 1881 with Aberchirder’s population at a record level the public wells and private supplies could no longer cope. After pressure from local people the Banffshire Commissioners of Supply agreed to set up a committee of local shopkeepers and tradesmen, led by Rev. James Boyes of St Marnan’s Church, to find a new source, and one was found on Cranna Hill. Water would be piped to a reservoir at what is now the top of Old Road, from where pipes would carry water to all parts of the village. In June 1883 when the water supply was officially turned on, a half-holiday was held, and a procession of over 1000 people led by 400 scholars (many waving flags with temperance inscriptions!) marched from Main Street up to the reservoir for the opening ceremony.
Despite the new water supply the public wells would continue to play an important part in people’s lives, as an entry in the Town Council minutes for 1894 reveal:
Bleaching green at Back Spoot: Mr Adams paid 4s for cleaning out ditch beside green. 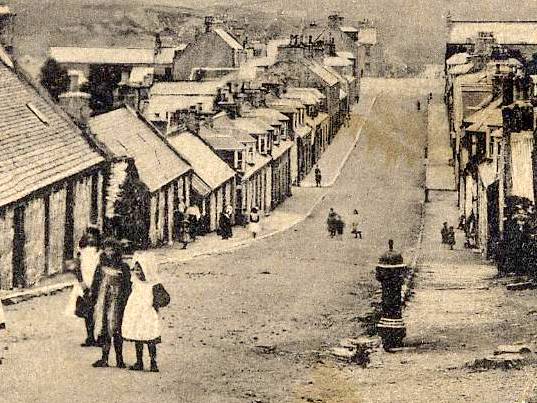 Street Pump, Top Of Main St, c.1908
Some houses were now connected to the new pipes, while others relied on street pumps which were erected. However it was not long before it became evident that Cranna Hill could not provide a reliable supply, particularly in summer, when the mains supply was shut off and the old wells had to be resorted to. In the 1890s the Town Council was already looking for further sources of water. Frequent mention of leaks in mains pipes and connections to properties suggest poor workmanship originally and lack of maintenance thereafter.

Drainage & sewage:
Although there had been an extension of the fairly basic drainage system in 1883, sewage was a constant concern for the Council. In the gardens people had ashpits, where ashes and other household rubbish were collected, along with the solid contents of the dry toilet housed in a “wee timmer sheddie”. The town carter occasionally emptied the ashpits and dumped the contents in Causewayend Quarry. When Aberchirder became a police burgh, the Council undertook a programme of building sewers along the main streets, including in 1894 a large one on North Street to divert the sewage that was formerly discharged into a burn that runs through the gardens at Auchintoul House!
By the turn of the century only a select few houses had installed WCs which, in view of the chronic water shortage, were not regarded favourably by the Council! These were connected to sewers which carried the waste to outfalls in South Street, from where open ditches ran to the Arkland Burn.
The Rectory at the top of Main Street was too high to get pressure, so the Boyes family got water got from a street pump or well. Legend has it that when they had a new WC installed around 1900 the cistern had to be filled by hand and only the head of the household was allowed to use the WC while the rest (all ladies) had to use the outside privy!
Cesspools still existed in some gardens, causing a health hazard, and it is recorded that in 1900 the Town Council had to pay medical expenses for a young boy who had fallen into one!

Lighting & heating:
Although New Marnoch Church had been lit by acetylene gas since 1844, all other properties in the village continued to rely on paraffin and it was not until 1914 that a few shops had acetylene lamps installed. Meanwhile street lamps first erected in 1877 on shops and inns on and near the Square and operated by a committee of townspeople, were handed over to the Town Council. The lamps – by 1914 twelve in all – continued to have paraffin lanterns which the Burgh Workman lit every evening in winter.

Lamp Posts In Square, c.1910
The main source of heating for houses came from a plentiful supply of peat collected by mossers on Auchintoul Moss, although by the late 19th Century coal could be bought from merchants based at local railway stations including Cornhill and Banff.