The mid-1960s was the time when regional economic development was adopted by central government as a means of countering the demise of traditional industry. The Town Council hoped to bring new industry to Aberchirder to prevent the need for its inhabitants to travel elsewhere for work, as well as attracting new people by providing enough modern housing for them. So the area to the northeast of the Burgh, including land bordering the old road to Corskie, became the focus of further housing plans by the Town Council, which was aware that any gap sites would not be enough to meet the needs of its proposed programme.

As a first step the Council decided to consider an extension of Wellfield Terrace to link up with Quarry Road and North Street. The following year newly appointed Burgh Architect Mr West presented a layout plan based on discussions with the Scottish Development Department and this was approved. The first phase would be 16 all-electric houses, with one main contractor and a time limit of one year for completion to be inserted in the contract. Settlement was reached with Mr Duguid of £550 for his land at Corskie, with the Town Council to accept a rent of £3 per acre for a year for land not needed for building.
It was at this point that the Architect reported that a new water drain would have to be laid through land belonging to Mr Gregor, Mill of Cranna, to the Arkland Burn. He also pointed out this was the last development where septic tanks would be allowed, so the Council would have to consider a comprehensive sewage scheme.

In autumn of 1967 the Scottish Development Department approved a tender from L A Anderson to build one block of two 3-apartment houses at 25 South Street and sixteen houses at Nos. 22-52 Wellfield Terrace (three 2-apartment, seven 3-apartment and six 4-apartment) and they were occupied by November 1968. 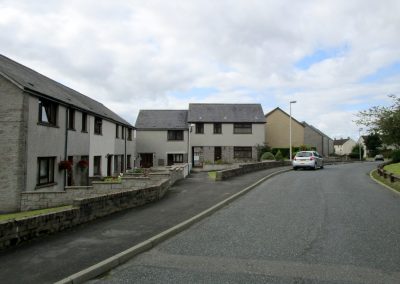 Early in 1969 steps were taken to establish a new burgh boundary to include the whole of the Cleanhill area as well as the area east of Causewayend Quarry for future development, and this was passed by the Sheriff the following year.
Mr West now submitted plans for a further 14 houses (ten 3-apartment and four 4-apartment) at Wellfield Terrace as well as gap sites elsewhere, with the contract with L A Anderson to be completed by 31 December 1971.
At the end of 1970 Mr West presented a layout plan for twenty-seven 3-aartmenpt houses to be built on the remaining area of Mr Duguid’s land. The Town Council agreed to proceed and ask L A Anderson if these could be added as an extension to his current contract.
Meantime it was decided that the address of the first new houses would be 1-8 Hardie Court (named after Provost Hans Hardie), and that the new roadway where houses were to be built should be called Corskie Drive (after the extension to Smith Crescent, known as the Corskie Road).
This phase was completed by 1973. 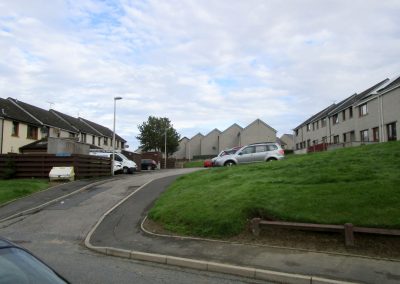 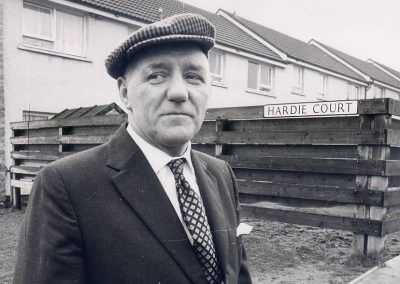 Planning for the final phase had already begun, as Mr West proposed building on land east of an extension of Smith Crescent (what is now Old Road, so named as it was an old track leading towards Banff). The Town Council was split over how many houses there should be, but eventually it was agreed to proceed with twelve 4-apartment and six 3-apartment houses as opposed to “at least 30” as wanted by Provost Bremner and Rev Walker.
In 1974 the Town Council bought Mains of Corskie farm from proprietor Mr Innes and applied to Banffshire County Council to have the southern end of its land zoned for future local authority and private housing and the northeast area for industrial purposes. [Link to Trade & Commerce] County Planning argued this should be done as part of an overall plan for future development of the Burgh as a whole and this was agreed. Mr West then produced a layout plan approved “for 49 local authority houses on the ground at North Cranna which adjoins the Mains of Corskie land”.

One of the last decisions by the Town Council before it was abolished in March 1975 was to issue a building warrant for 38 houses and the successor housing authority, Banff & Buchan District Council, accepted a tender from L A Anderson for the development. In 1977 the Council decided to name the new streets as Hill View, Meadow Court, Old Road and West’s Way (after the Burgh Architect). 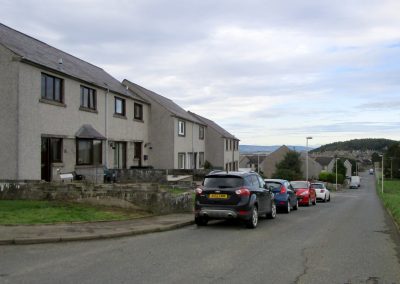 This phase was completed by 1980. An aerial photograph of Aberchirder taken at that time shows the whole Corskie development – which had cost over £500 000 – as well as the first phase of L A Anderson’s Causewayend project 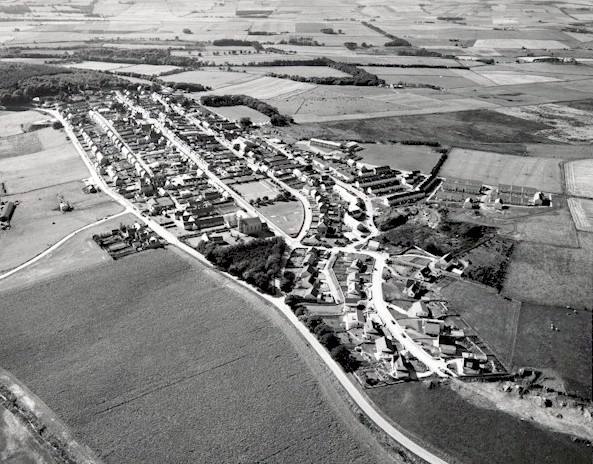 With the completion of this phase, Banff & Buchan District Council decreed in 1983 that “the remainder of the site is unsuitable for housing at reasonable cost. Part of the Cornhill Road site, under acquisition, should be substituted as the next site for building, apart from gap sites.” This site appeared for many years in Local Plans designated for housing, but it has never happened, for reasons including the cost of pumping sewage uphill to reach the sewage works.

While the Corskie project continued, the Town Council received in 1973 a report from the Burgh Architect on the 129 existing council houses, which he estimated would need repairs and alterations costing around £135,000. A programme approved by the Scottish Development Department including installing electric central heating was completed by the following year. Thereafter the successor authorities – Banff & Buchan District Council and Aberdeenshire Council – operated a policy of continuous modernisation of their housing stock.

As early as April 1967 the Burgh Architect reported difficulties regarding sewage for Wellfield Terrace housing and the Town Council agreed that, as this was the last development where septic tanks would be allowed, it would have to consider a comprehensive sewage scheme to deal with its proposed new housing developments. A year later the Banff Moray & Nairn River Purification Board expressed concern about continuing use of “septic tanks discharging to a common drain, to an open ditch and finally to the Aberchirder [sic] Burn”. The Town Council agreed to hire engineers W A Fairhurst to do an inspection and consider what future steps might need to be taken and to suggest a site for a sewage works.

Five years later Fairhurst announced they expected to start work on the project shortly, with the sewage works to be built on land beside the Arkland Burn bought by the Town Council. Responsibility for the project passed in April 1975 to the new Grampian Regional Council, which awarded the contract in November 1976 to L A Anderson. When completed and opened 23 months later the overall cost, including the demolition of septic tanks, amounted to over £390,000.
Thus Aberchirder could finally boast a modern water supply and sewage system. 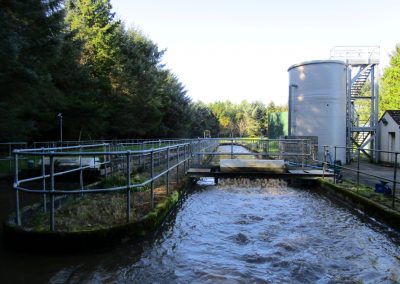