Over the centuries since Christianity came to Scotland there have been regular and sometimes violent disputes between members of different Churches and between the State and certain Churches.

One of the joys of living in the Northeast of Scotland today is the absence of sectarianism and bigotry. Although people may belong to a particular Church – or none – they all get on together.  Even at times of strife such as the 1840s there does not seem to have been much animosity between the members of the various congregations.
In this section of the Museum you can follow the changes in the religious life of the Parish of Marnoch.

The Parish of Marnoch is named after St Marnan, a Celtic missionary from Ireland who in the 7th Century settled on the banks of the River Deveron near what is now Bridge of Marnoch.

Since the time of St Marnan there was always a church in the kirkyard beside the river and over the centuries it served in turn Roman Catholics, Episcopalians and Presbyterians.  By 1790 the existing church had become totally ruinous and the Presbytery decided to build a new church close by on Cairnhill to escape from the smells of the kirkyard! However, the gable end of the ruined church can still be seen in the kirkyard.

The Old Manse of Marnoch lies across the Crombie Burn from the kirkyard. In 1790 the minister lived there rent-free and had an income of 90 bolls of meal, and 22 bolls of bere. He could also grow food on the glebe and had the right to fish a stretch of the Deveron at what is now called the Minister’s Pool.

The Rev David Henry, writing his account of the Parish of Marnoch in June 1842 for the New Statistical Account states that in 1831, there was a great sensation in the parish when a grave was robbed, and local people raised funds to build a watchhouse in which the bodies of the dead were laid for two months before being buried. It was built in the south-east corner of the graveyard on the site of an earlier church which had been granted in the 13th Century by William the Lion to Arbroath Abbey, which owned the land at that time. In 1877 the watchhouse was enlarged and became home to gravediggers and their families. 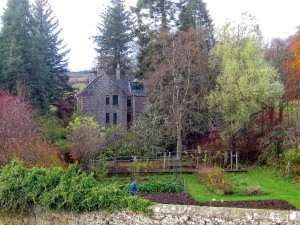 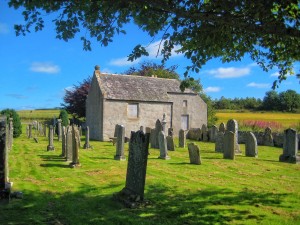 Marnoch and the Disruption
In 1841 Marnoch hit the national headlines as the result of a bitter dispute over who should have the final say in selecting the minister for a Church of Scotland parish.
By the 1830s Church of Scotland members were split into Moderates, who accepted the right (under the 1712 Patronage Act passed by Parliament) of landowners to nominate ministers, and Evangelicals, who believed the congregation should have the final say.  The Evangelicals persuaded the General Assembly in 1834 to pass a Veto Act allowing a congregation to veto a minister they did not want – so church law contradicted secular law.

In Marnoch, the death of Rev William Stronach in 1837 meant that a new minister was required. The patrons (the trustees of the Earl of Fife) selected John Edwards, but the congregation preferred David Henry (right) who had been Mr Stronach’s assistant in his last years.
After a long legal battle, members of Strathbogie Presbytery appeared at Old Marnoch on 21 January 1841 to induct Mr Edwards.
The dispute had attracted national attention, and a large crowd gathered at the Manse of Marnoch despite having to overcome deep snowdrifts which prevented all but one Aberdeen stagecoach reaching Turriff, from where a carriage with four horse had taken several hours to travel the eight miles to Aberchirder. 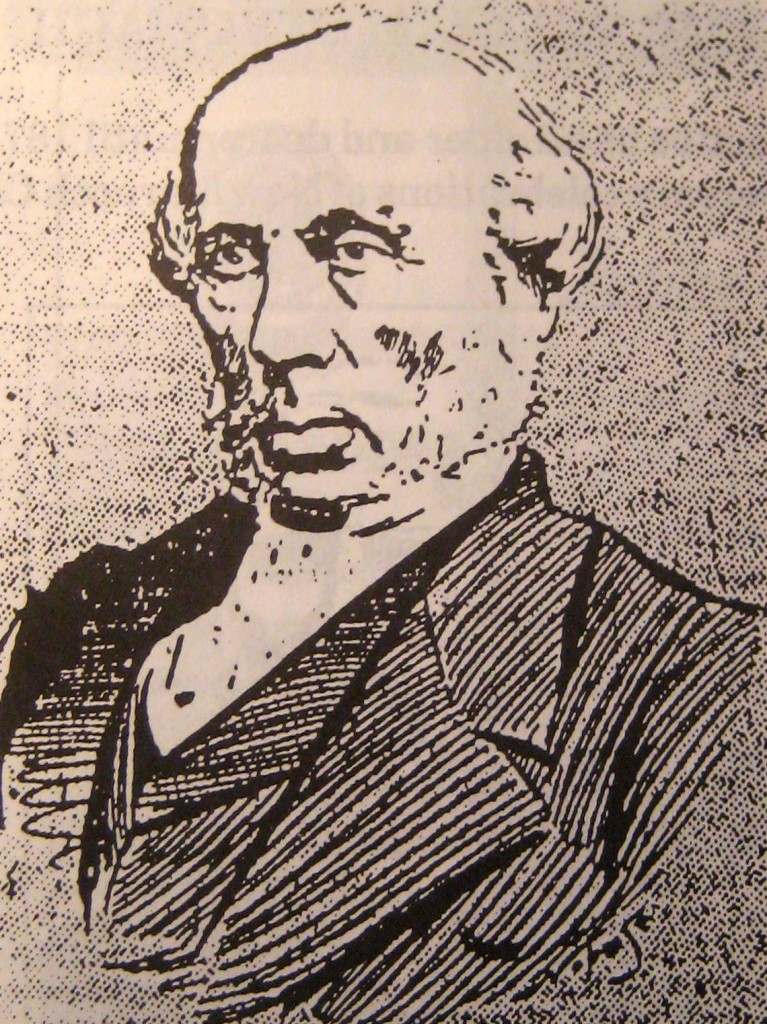 Early in the proceedings all but one parishioner walked out.
The Aberdeen Banner, an Evangelical newspaper, described the scene thus:
Old men with heads as white as the snow that lay deep on their native hills, the middle aged, and the young…went out into the wilderness…many in tears and all in grief. 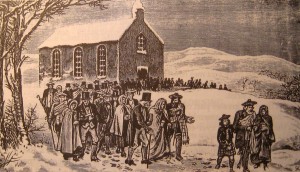 Thereafter a crowd of protestors who had come from all around began a riot in the church.
The Banner reporter noted that, as he re-entered the church:
Several people were employed in throwing snow, pieces of bread and copper coins at the members of the Presbytery.
The riot was eventually quelled by Mr Stronach of neighbouring Ardmeallie House and Mr Edwards was inducted.

An eye-witness account of the intrusion was noted in a letter from John Paterson to his brother Walter who had emigrated to Australia in 1838.

The breakaway congregation now had the problem of finding new premises for worship. As a temporary measure they held services in a sawmill at the Inchline at Marnoch, and in a disused factory they were already using in Aberchirder. Amazingly within 26 months they had raised over £3000 from a Scotland-wide appeal. This was more than enough to build a new church and manse (replaced by the present one in 1965) at the east end of Main Street in Aberchirder, with Rev David Henry as minister. 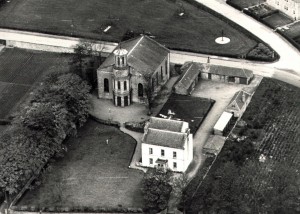 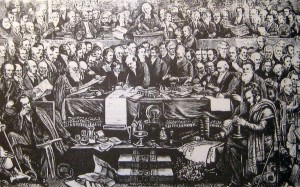 The United Presbyterian Church and United Free Church
While the events at Marnoch were unfolding, another Presbyterian church was built in the town in 1839 by members of the United Secession Church, which had been formed nationally in 1820 by several groups who had left the Church of Scotland in search of more evangelical preaching.  The building, at the corner of Cornhill Road and North Street, became the United Presbyterian Church in 1847 and was largely rebuilt in 1893.
Seven years later the UP and Free Churches combined to form the United Free Church and from 1907 the excess building became the West Hall. 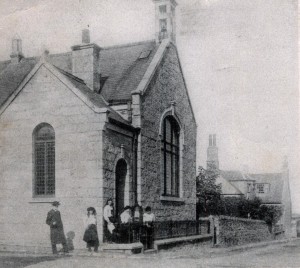 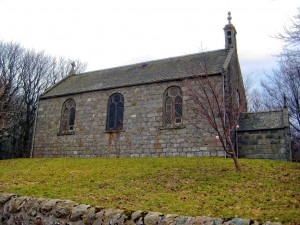 St Marnan’s Episcopal Church
After the Jacobite Rebellions of 1715 and 1745, when Episcopalians had tended to support the Stuarts, the Government had passed laws banning Episcopalians from gathering in any numbers for worship. These laws were repealed in 1792, and gradually new churches were constructed, including the one at the top of Main Street in Aberchirder in 1824, the first in this area. Under the charge of Rev George Boyes, it was rebuilt in 1874-76, and a school opened beside the church in 1877.

Roman Catholic Chapel
In the second half of the 18th Century Miss Catharine Gordon of Auchintoul House had a resident priest who held regular services there for Roman Catholics in the district.  Before the end of the century she had a chapel built in Aberchirder, in what is now Rennie’s Lane, and it was in use during much of the 19th Century. 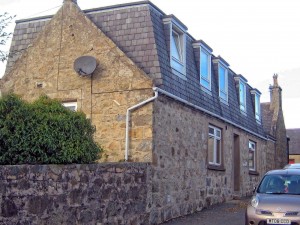 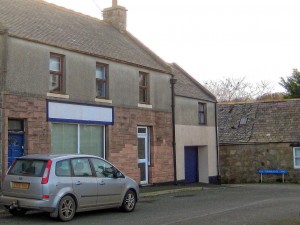 Church of Christ
For a time at the beginning of the 20th Century Provost William Auchinachie was a member of the Church of Christ which met in a hall above his shop in the Square. This Church was prominent in the temperance movement of that time but the congregation gradually dwindled away.

Baptist Chapel
A Baptist Chapel existed in Foggie no later than 1866 and until the mid-1930s. The small congregation held services in a hall behind the shop across the lane from the present-day Post Office in Main Street but no records relating to it have so far been traced.
This pewter communion cup was presented by the congregation to Rev Samuel Crabb, who was minister 1866-1868. It was made by the well-known silver and pewter manufacturer James Dixon of Sheffield. 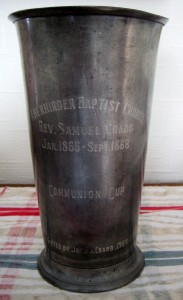 In 1929 the UF Church reunited with the Church of Scotland, and from that date Marnoch had two Church of Scotland buildings – Old Marnoch at Cairnhill and New Marnoch in Aberchirder.
Ironically, Old Marnoch Church, which had held evening services in Aberchirder – possibly in the Temperance Hotel – for many years had decided to build its own Church Hall for the purpose, and it opened in Main Street in 1899.  Thirty years later this became purely a hall and is still much used as a venue for community activities.
In 1947 the West Hall was sold, and was used as a cinema until the end of 1950s, when it was disposed of.
Today just two of all these churches are in regular use – New Marnoch and St Marnan’s.  Old Marnoch can still be visited by appointment and is occasionally used for weddings.

You will find a more detailed history of the churches in Marnoch in the book Aul’ Kirkers, Free Kirkers and U.P.’s in Marnoch 1792 – 1992 by Bob Peden