When World War One broke out in August 1914, large numbers of men volunteered enthusiastically to join the armed forces. The slogan ‘Home By Christmas’ reflected the prevailing optimism. However the increasing carnage on the Western Front in 1915 meant that the Government had to introduce conscription early in 1916. The sacrifices of local men are recorded on the memorials at Old and New Marnoch churches and at Culvie School.
This section gives glimpses of how the daily lives of local people who remained at home were affected by World War One, in its early and latter stages.

In 1880 1st Banffshire Rifle Volunteers had been established, and four years later became the 6th Volunteer Battalion Gordon Highlanders (Banffshire Rifles). Headquarters were at Keith, with George Smith Grant of Auchorachan as Colonel Commanding. Staff officers included Surgeon-Lieut. A B Whitton, who was Captain of the Aberchirder Volunteers. The photograph below, taken around 1900, is of members assembled in the Square in front of the Jubilee Fountain and lamp posts erected in 1897.
(Picture courtesy of Archie McBain) 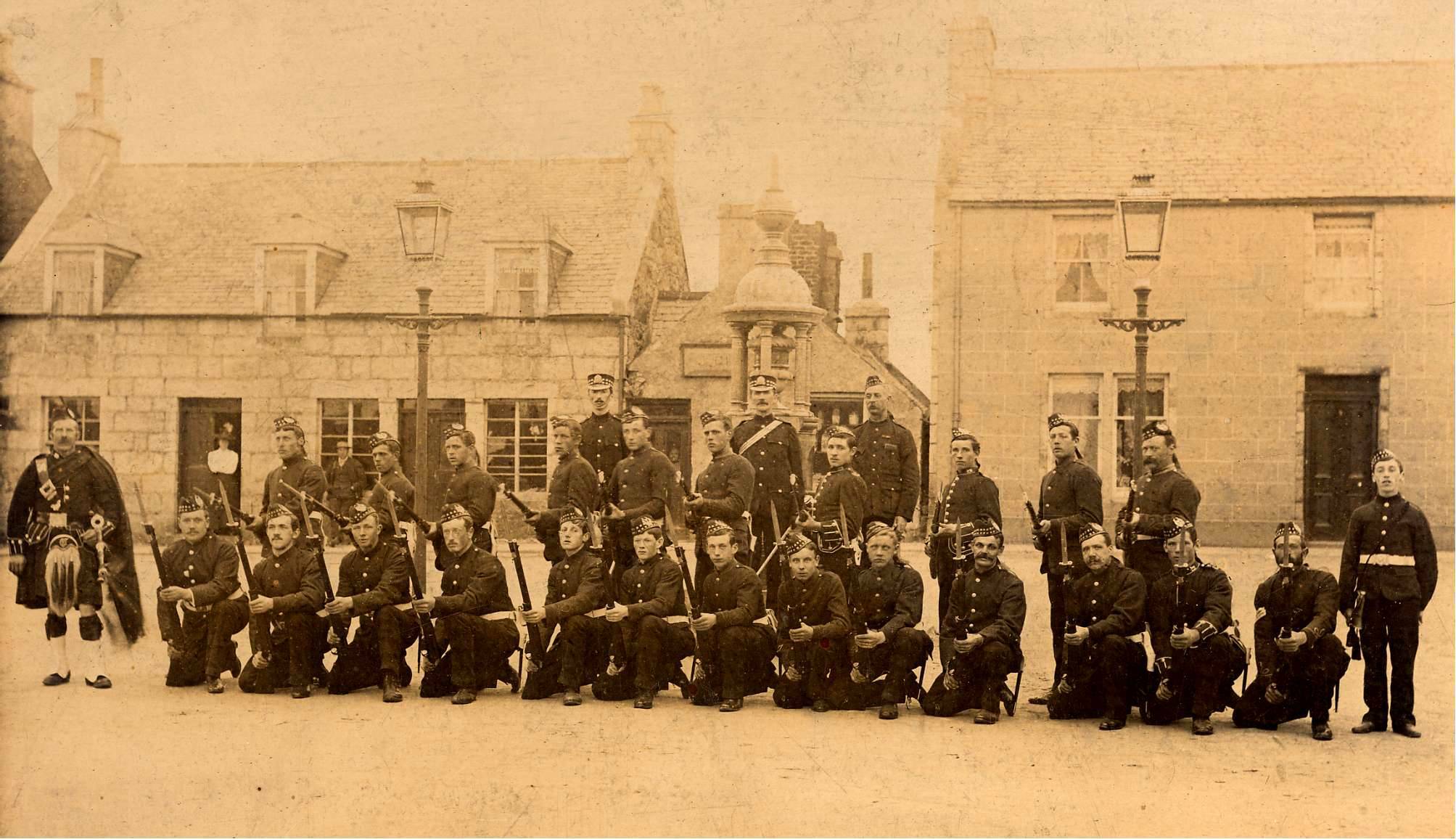 Below are extracts from the Banffshire Journal showing some of the effects of the outbreak of war locally in the summer of 1914:

“A very enthusiastic farewell was given to the local section of the Territorials on their departure on Thursday morning. They left in two brakes for their headquarters at Banff en route for Keith. Before they left Bailie [Frank] Anderson addressed the men and said they were all very proud of them and hoped they would do their duty and bring credit to themselves, their King and their country. He wished them God speed and a safe return. The men then left amidst enthusiastic cheers from the crowd.”
(Banffshire Journal 11 August 1914) 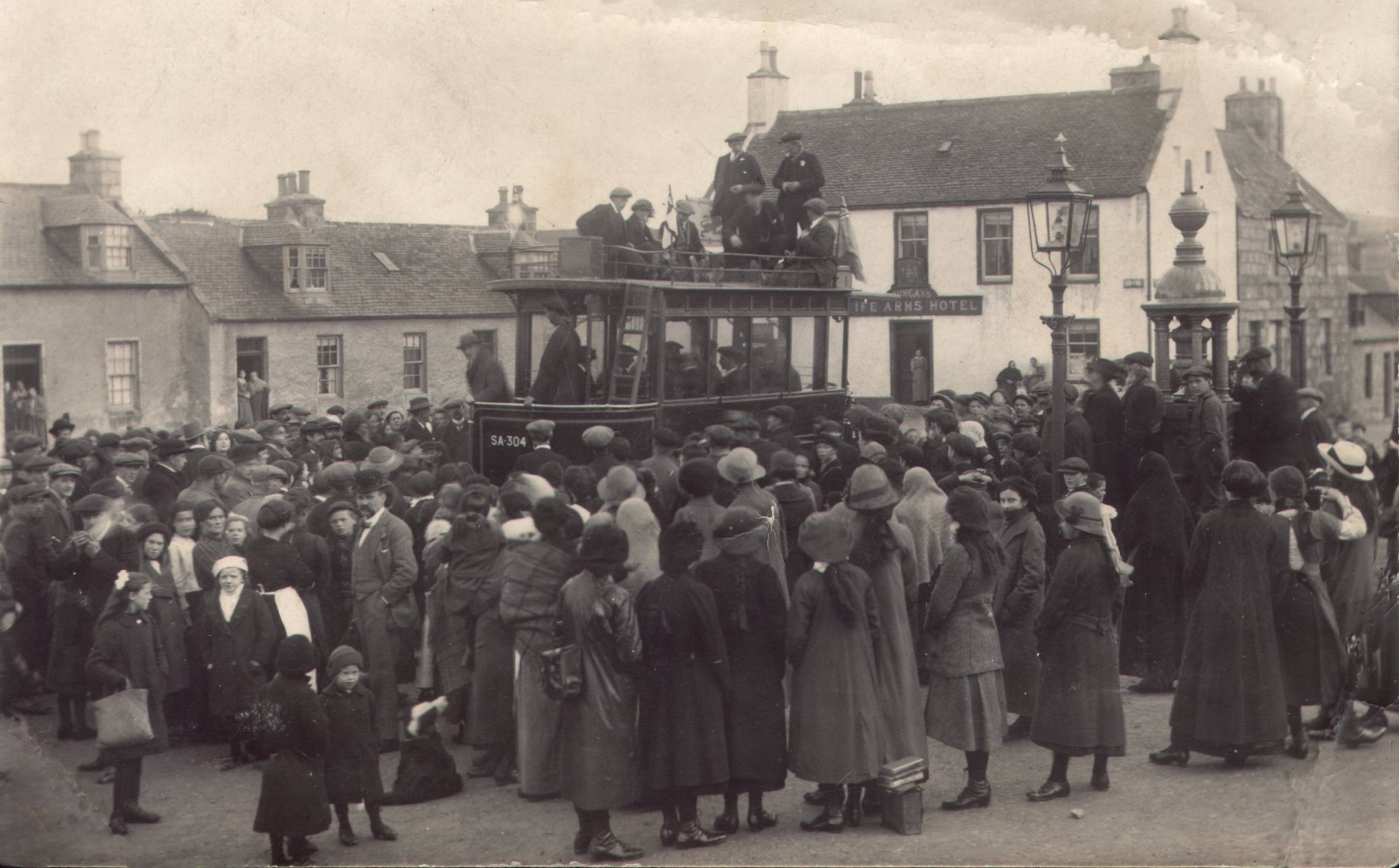 “Everything is very quiet and dull in Aberchirder and district, the war having cast quite a gloom over the place. On account of the crisis the Oddfellows picnic and the flower show have been put off for the season.”

Aberchirder & Cornhill Agricultural Association also decided to put off their show: “People are in no mood for shows meantime.”

No plans had been made to celebrate Foggie’s 150th anniversary.

House-to-house collections in aid of Prince of Wales’ National Relief Fund and Banffshire Territorial Fund were organised by Aberchirder Town Council for the burgh and Marnoch Parish Council for the rural area.

Hospital authorities have given the Government use of 15 beds during the war crisis. 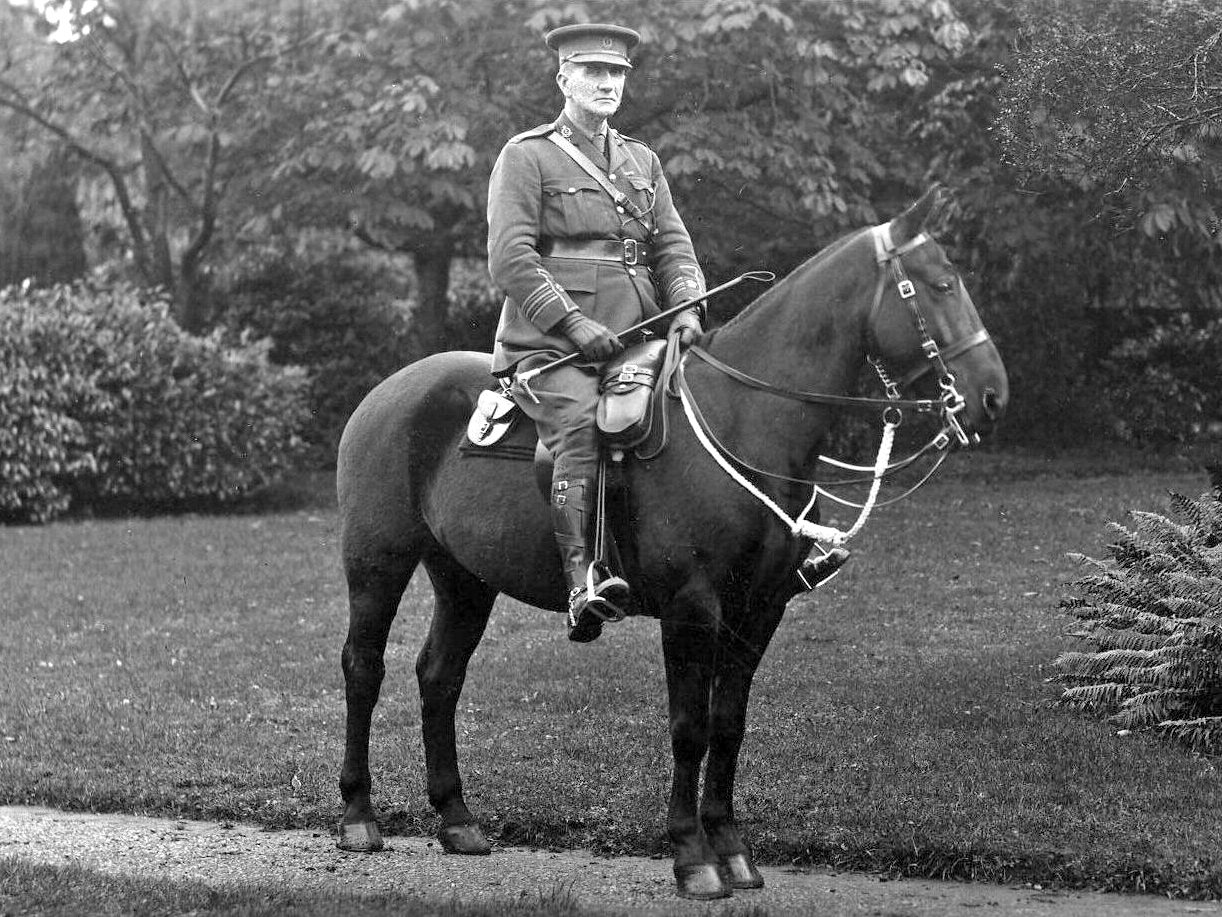 In September 1914 Dr Alex Urqhuart Webster, son of Mr Charles Webster, Mill of Auchintoul, was appointed as a surgeon at the British Red Cross hospital at Rotten. This photograph shows him (left) in happier times as a boy around 1900.
(Picture courtesy of James Hay)

Dr Alfred Bell Whitton was a doctor in Aberchirder and district for thirty years and served several terms as Provost from November 1907 until August 1919. Among his many public activities he was Captain of the local Volunteers. When the war broke out he joined up and served in home training camps with the R.A.M.C. ultimately becoming a Lieutenant –Colonel in the 6th Gordons.
(Picture courtesy of P Cunningham) 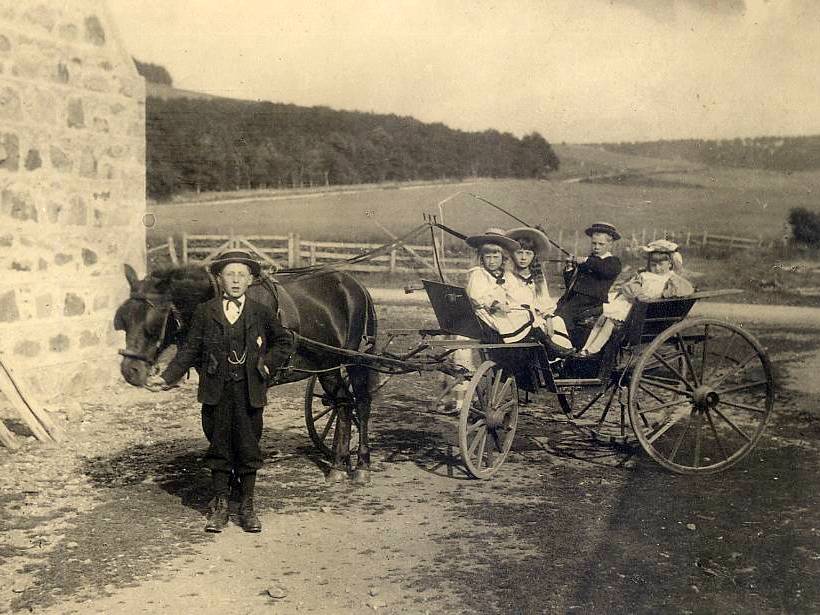 This poster, probably published in late 1914 or early 1915, is a valuable document which lists men with Marnoch connections who were already serving in the armed forces and calls on others to do their patriotic duty by enlisting.
To read the complete list of names, click on the thumbnails below. You will see that, although the 6th Battalion Gordon Highlanders was the local one, men had joined a wide range of military and naval units.
(Pictures courtesy of James Hay) 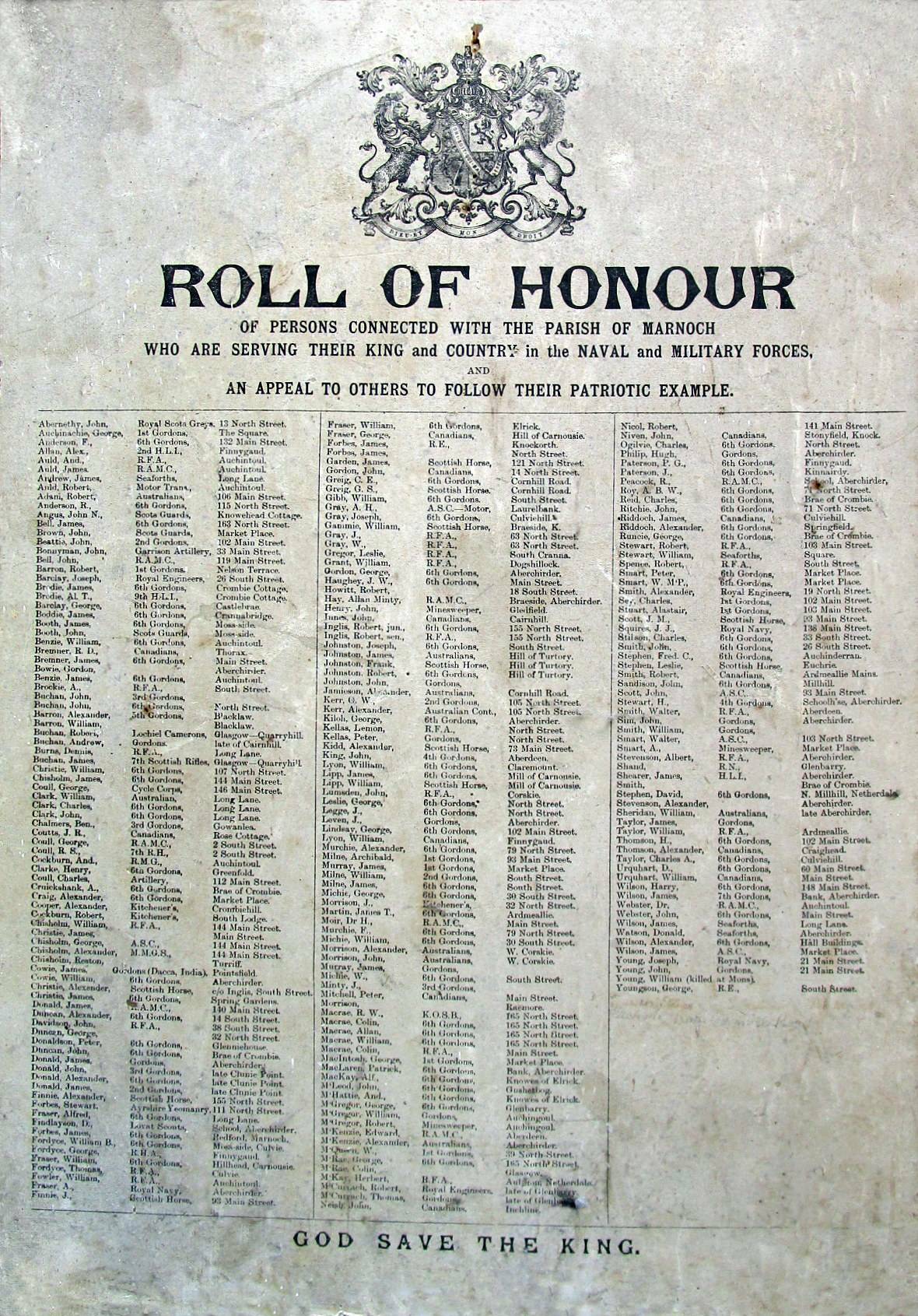 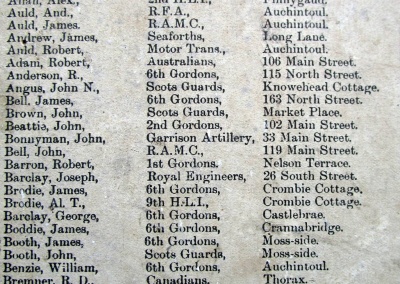 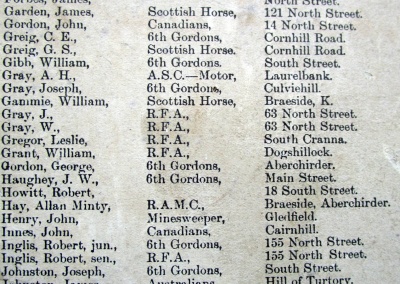 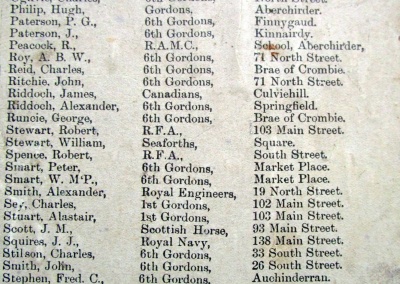 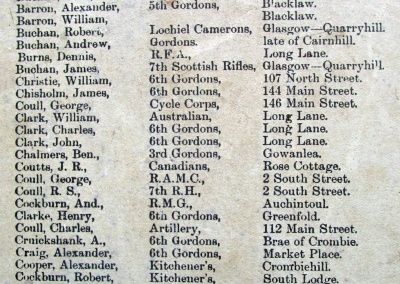 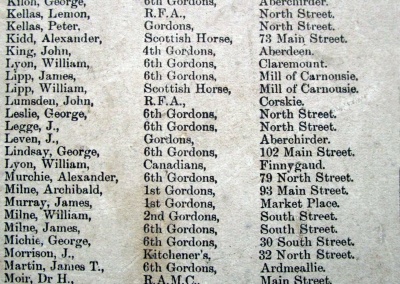 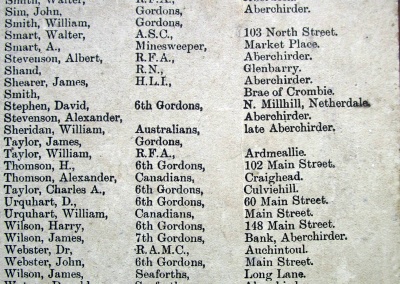 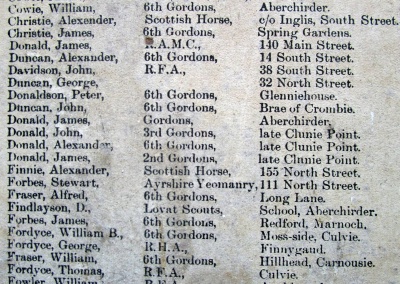 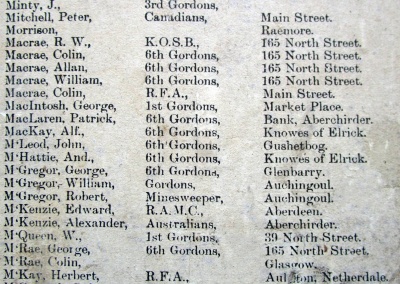 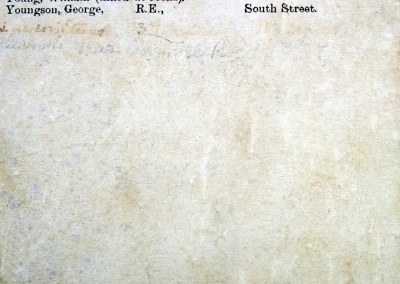 The following extracts from the Banffshire Journal show some of the ways in which the local area was affected in the latter stages of the war:

“Private Croall, of the Highland Light Infantry, at present a patient in the Rose Innes auxiliary hospital, was decorated with the D.C.M. at Aberdeen on Saturday. On his return he was waited on by members of the Town Council. Bailie McKenzie, acting Provost, said he was proud to shake the hand of so young a hero, and in the name of the Town Council congratulated him on his well merited honour, which they desired to supplement by presenting him with a little gift to keep green in his memory the friends he was now among. Bailie Anderson handed to him a luminous wrist watch, the gift of the Council. Sister McKay put the watch on Private Croall’s wrist…”

“A game of curling was played on the Aberchirder pond on good ice on Wednesday between teams representing the wounded soldiers in the Auxiliary Hospital and members of the Curling Club, resulting in a victory to the soldiers by a few points.”

“On Thursday [a group of] ladies … entertained the eighteen soldiers now in the Rose Innes hospital to tea, along with friends, in the drill hall. The night was stormy and wet; notwithstanding the soldiers, nurses and guests arrived in good time. Forty-five sat down to tea, which was greatly enjoyed. Progressive whist, games and a dance were entered into with glee and spirit, and the hour of departure came all too soon. The Sergeant … thanked the ladies and their friends for doing so much for their enjoyment. Miss [Jessie] Smith, teacher, always at her best at a social gathering, returned thanks …” 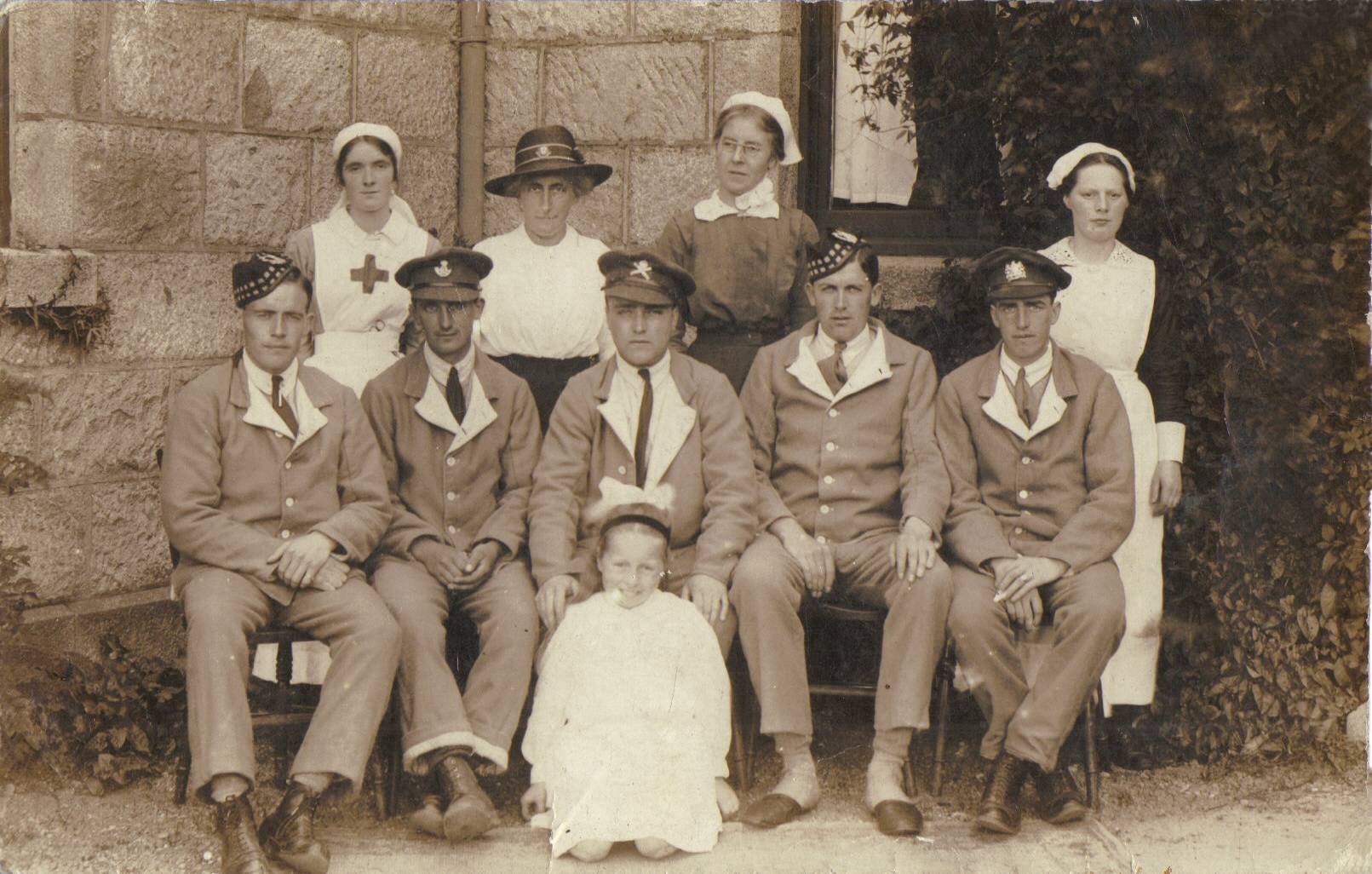 “The war work parties in the parish of Marnoch have sent to Mrs Gordon Duff at Drummuir 2153 garments during the past winter… A meeting of the War Work Party was held on Monday, when the following garments were handed in to be despatched to Mrs Gordon Duff of Drummuir – 4 pairs socks, 12 mufflers, 1 helmet, 3 shirts, 6 hospital caps and 1 pair cuffs. Miss Ingram intimated a donation of £1 from a friend to the work party funds. It was agreed to discontinue the regular meetings during the summer. A total of 308 garments have been sent to the depot, including a number of mufflers, cuffs and mitts knitted by the school girls.”

“A good deal of shifting has taken place at this term among farm servants and cottars. Most of them are getting big advances in their wages, especially boys from 14 to 16, who are getting from £15 to £25, and from 16 to 18 from £25 to £30per half year, which is the highest on record. There are very few removals among the house tenants in Aberchirder.”

“A meeting of the committee of this fund was held on the 10th inst, Bailie Anderson presiding. It was reported that postal orders had been sent to five prisoners of war, 20 parcels with comforts to soldiers serving in Salonika, Mesopotamia, Egypt and India, and 100 to soldiers in France. It was decided to send some cigarettes and stamps to all wounded in hospitals in this country, and either cigarettes or tobacco to men stationed in the United Kingdom and Ireland. A donation of £5, being proceeds of [a] wood carters’ dance, held in Aberchirder, had been intimated from Mr John Scott, secretary, which the committee were very pleased to receive on behalf of the fund.”

“The influenza epidemic has been very prevalent in Aberchirder for the past eight days, and many of the inhabitants are suffering from the malady. We regret to say that four fatal cases have occurred in the burgh. All the schools, both in town and parish, have been closed on account of the epidemic, while the half-yearly communion, which was to be dispensed in the Parish Church on Sunday next, has had to be postponed for a fortnight.”

While communities all over Britain celebrated the end of the war in November 1918, local people had no official event to mark the occasion, as this extract from the Banffshire Journal explains:

“At a meeting of Town Council on Thursday Bailie Mackenzie expressed regret that no official telegram has been received announcing the acceptance of the armistice terms by the enemy and the cessation of hostilities, and that on that account no celebrations had been held in the town. It was agreed to light about one-third of the lamps in the central parts, the lighting being limited on account of the expense of paraffin, glasses, &c.”

At the same meeting the first step was taken which would lead to the opening of Marnoch Memorial Hall – eight years later!:

“The meeting had under consideration the question of erecting a local memorial for men who had fallen in the war, and it was agreed to call a meeting of all the public bodies in the parish in connection with the matter.”

Just twenty years after the end of World War One, Britain was on the brink of a second world war. This photograph, taken at Keith in 1939, shows the local Territorials of the 6th (Banffshire) Battalion, which was part of the 153rd Infantry Brigade, 51st Highland Division. Although no names have been provided, many of the group would have had Marnoch connections.
(Picture courtesy of Charlie Anderson) 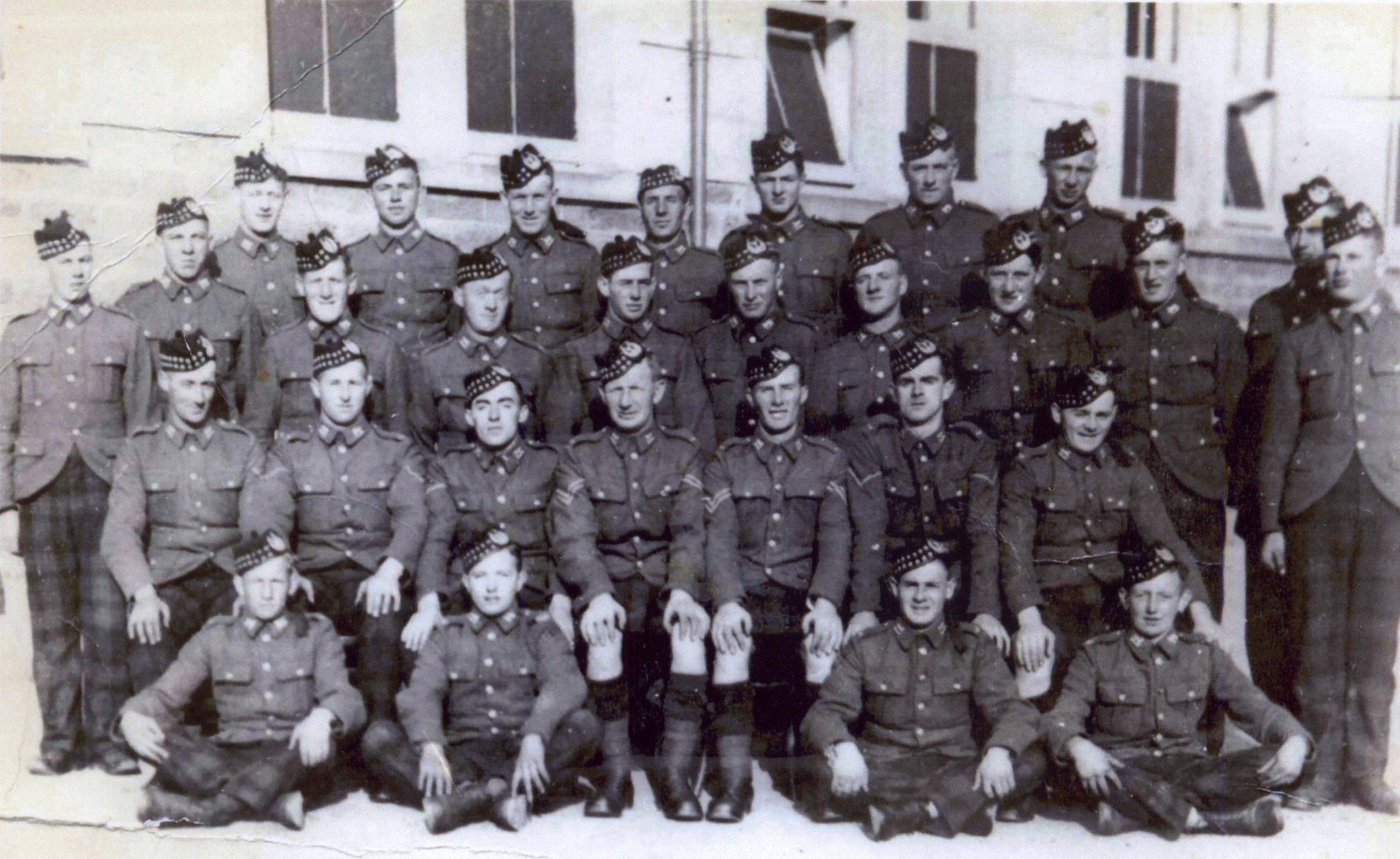 In 1940 the Battalion joined the 2nd Infantry Brigade of the 1st Infantry Division. Having moved forward into Belgium along with the 4th Battalion, the troops were obliged to fall back on Dunkirk, where they were finally evacuated to England. The Battalion fought through the North African and Italian Campaigns and in 1945 were in Palestine on garrison duty before the end of the war.