During the 1890s there were proposals to build a rail link between Rothienorman and Tillynaught through Aberchirder. The proprietor of the Fife Arms Hotel in the Square bought land next to these houses on South Street opposite New Marnoch Church with a view to building a Station Hotel. However the project – probably wisely from the economic point of view! – was blocked by Frendraught Estate. 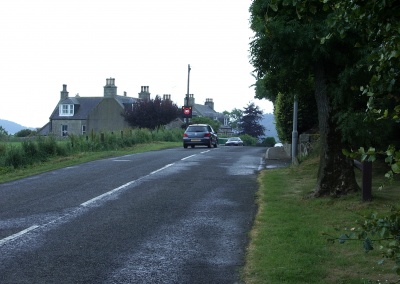 A much more sensible idea came to fruition in 1905 when the Great North of Scotland Railway company set up a motor bus service between Aberchirder and Huntly, having bought out William McMillan’s horse-drawn omnibus service. The railway bus garage was built at 46 Main Street on the site of a number of derelict houses bought from Alexander McHardy who, a year later, built the pavilion for the Bowling Club. Two 18-seater Milnes-Daimler buses (SA147 and SA151), with bodywork built at Inverurie Loco Works, were allocated to Foggie. The first run was on 1 May 1905.
Journeys cannot have been very comfortable, given that the wheels had solid tyres and the road surfaces were bumpy. Indeed the buses soon became known locally as Foggie Dirders (boneshakers). The service offered two buses a day (three on Saturdays), connecting with trains at Huntly.
The pictures below show the motor buses and how their introduction affected owners of horse drawn vehicles for good or bad: 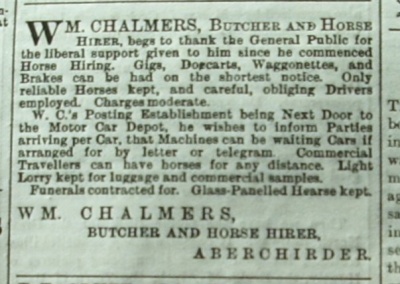 Advert for the 1905 sale of McMillan’s bussing and hiring plant, including 14 horses, 29 vehicles and assorted equipment. This was the result of a deal between McMillan and GNSR to end his horse bus service to Huntly. However he continued in business, running on other routes. 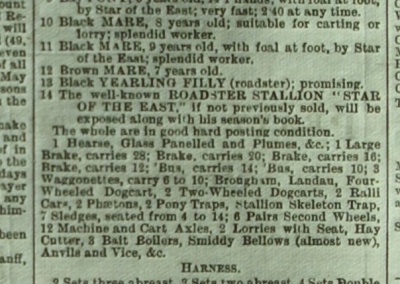 A 1904 Milnes-Daimler bus at Huntly station ready to take GNSR officials on a trial run to Aberchirder. (Picture courtesy of GNSRA) 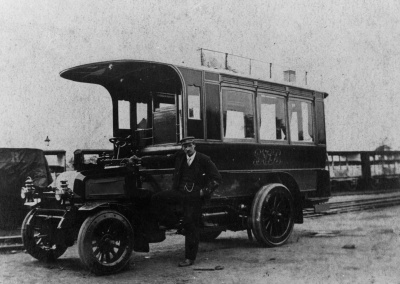 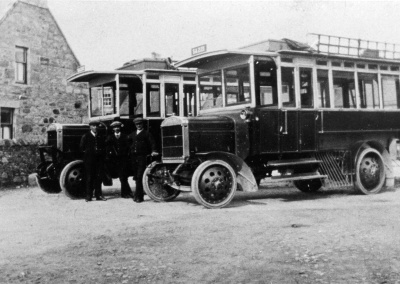 SA147 and SA151 at Aberchirder depot.
(Picture courtesy of GNSRA)

A wonderfully evocative photograph by William Auchnachie Jr showing the old and new modes of transport in Main Street around 1906. Bus SA147 is waiting outside the depot.
(Picture courtesy of Evelyn Chalmers) 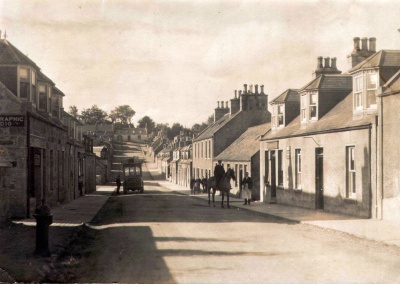 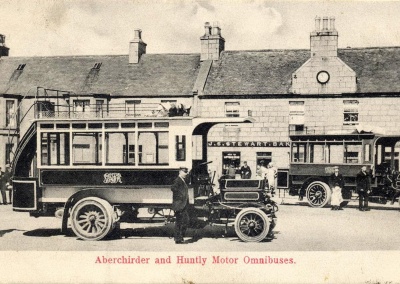 Aberchirder & Huntly Motor Omnibuses. Two GNSR buses (SA151 and SA147) in the Square just after the service began in 1905. Driver John Rennie – grandfather of grocer William Rennie – is standing at the front of the nearer bus.
(Picture courtesy of Evelyn Chalmers)

GNSR bus SA151 passing the South Lodge at Bridge of Auchintoul. Note the two men sitting on top with the luggage, and the children sitting on the grass verge.
(Picture courtesy of Evelyn Chalmers) 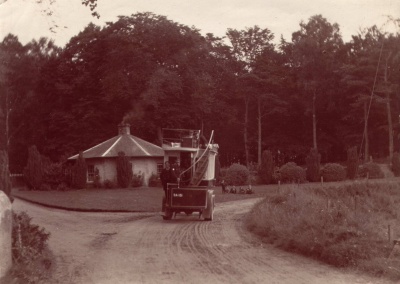 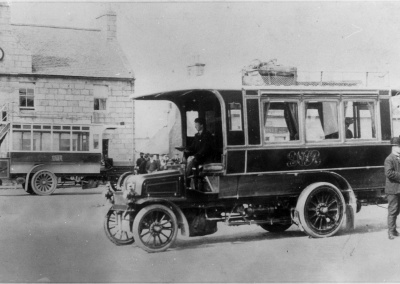 Two 1916 Thorneycroft buses (SA2211 and SA2212) at the Aberchirder depot after World War One.
(Picture courtesy of Aberdeen Transport Society) 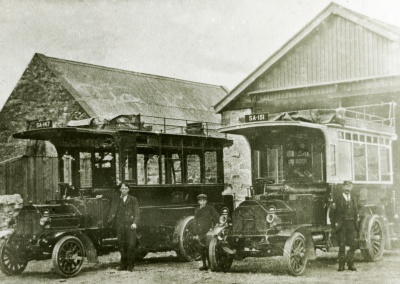 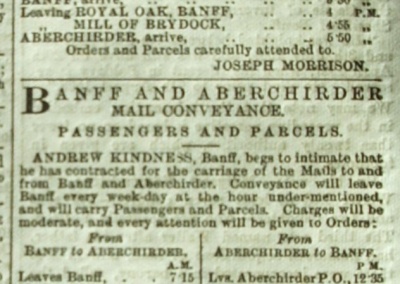