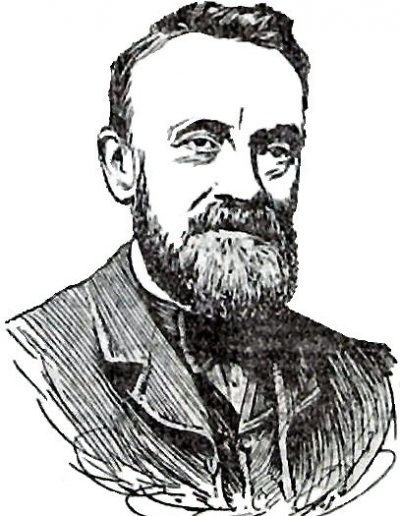 When William Auchinachie died aged 67 in 1907 it took a lengthy obituary in the Banffshire Journal – for which he was local correspondent for almost twenty-five years – to do justice to his contribution to the development of Aberchirder. From 1875, when he took over the general merchant’s business founded by his father in 1838, he held office – in many cases for a quarter of a century or more – on bodies including the School Board, Parish Council, Aberchirder Hall Company, Horticultural Society and Aberchirder Total Abstinence Society. At Banff County Council level he was a Justice of the Peace, member of the Licensing Board and representative of the Burgh of Aberchirder. And it was he who in 1897 presented the fountain to mark the Diamond Jubilee of Queen Victoria. All this while running a busy and successful business in the Square!

To see the full Banffshire Journal obituary, click on the boxes below. Read each row from left to right: 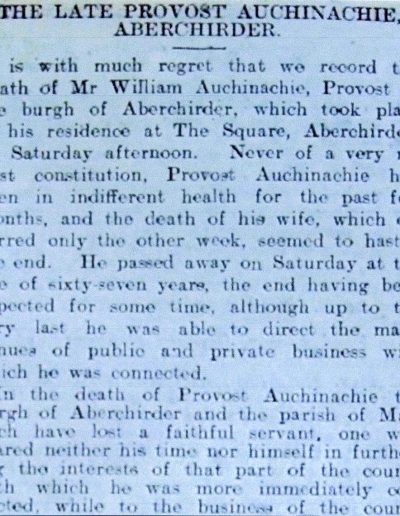 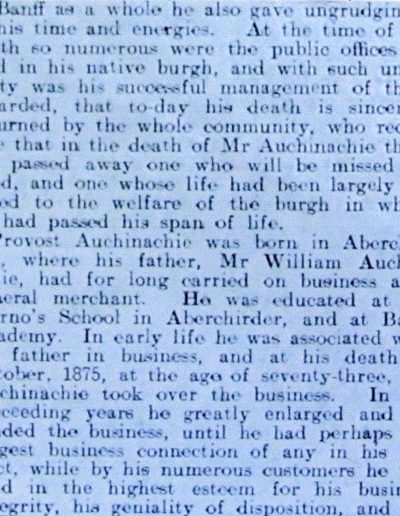 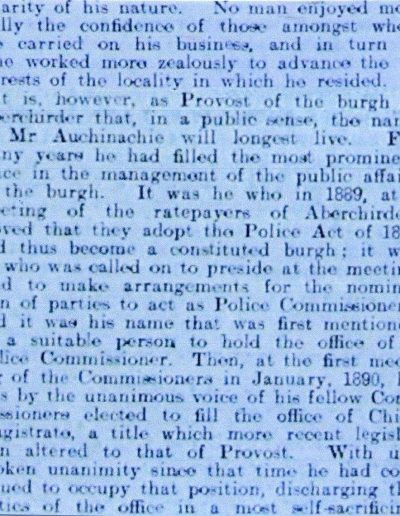 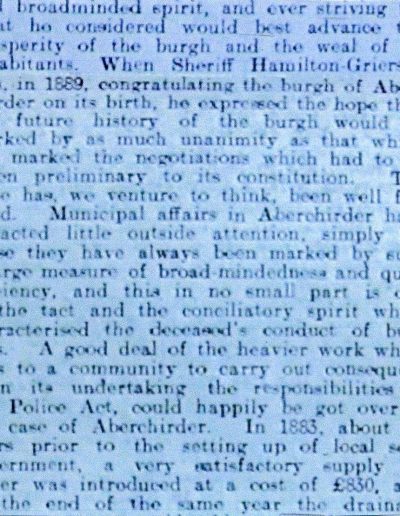 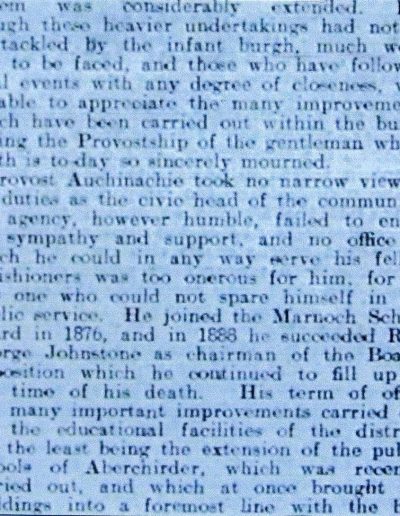 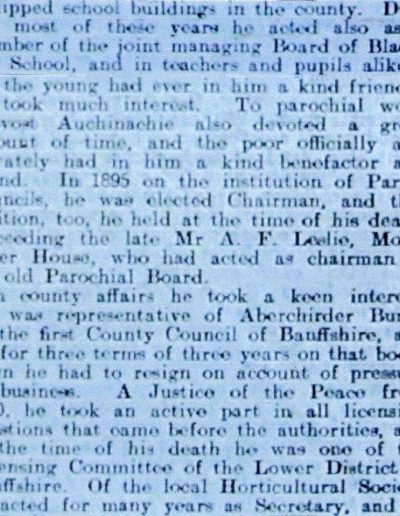 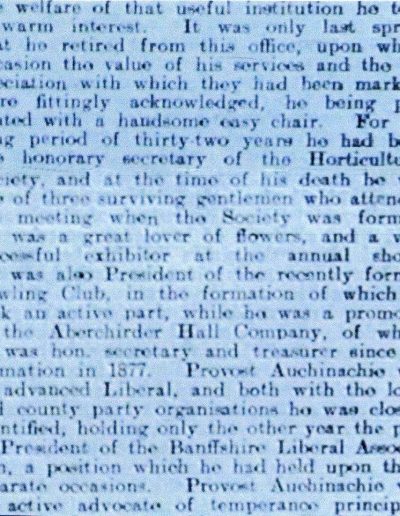 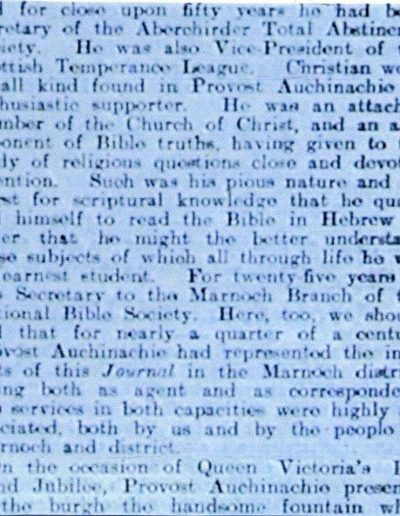 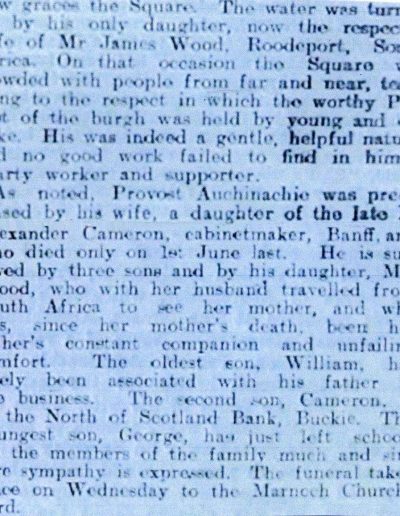 The Jubilee Fountain:
The Town Council minutes of 7 June 1897 record that
“The Commissioners unanimously agreed to lay the foundation of the fountain to be erected on the Square by Provost Auchinachie and taking a connection from the water main to supply same with water and provide the necessary drains and also agreed to employ Robert Anderson to do the work, the drain to be laid of 3 inch fire clay pipes and the foundation to be laid of rough granite blocks of one kind and Messrs Beattie and Fordyce to be instructed to provide and lay same.” 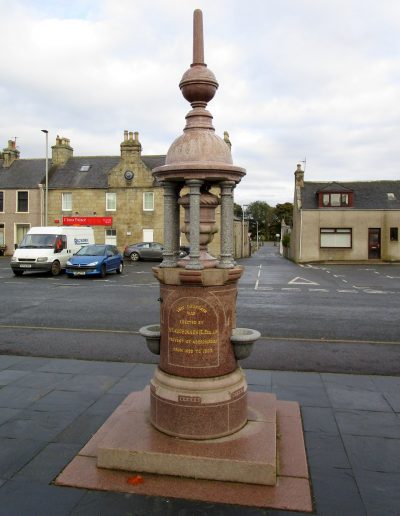 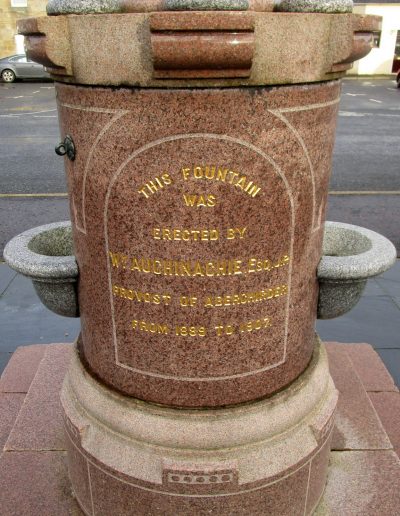 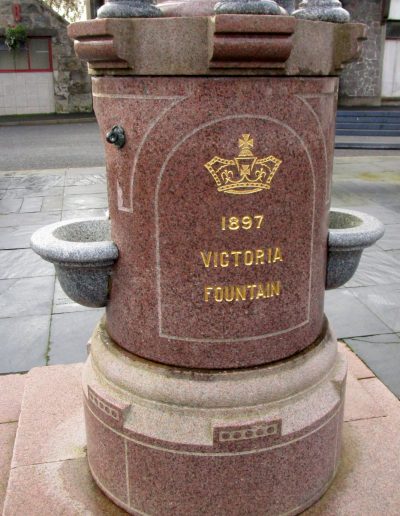 Two provosts in one day!:
James Anderson, an evangelist and advocate of abstinence, had a book published in 1912 by the Publishing Committee of the Churches of Christ. In it he describes visits to Aberchirder to meet Mr & Mrs Auchinachie:
“I have been a few times to Aberchirder, a clean, compact little burgh, lying about eight miles from Banff and nearly as many miles from a railway station. When there I was generally the guest of our late Brother and Sister Auchinachie, and that was always a treat. They were both very intelligent, and deeply interested in religious matters. Bro. Auchinachie was somewhat slow to speak, though he could not be said to speak slowly. He thought quickly and clearly and acted promptly. He had a well-stored mind and a large and carefully selected library; his conversation was always profitable. He was a wise, fatherly guide to the little Church there. Once or twice I was driven by Bro. Munro of Banff from there to Aberchirder on the Sunday morning and back again in the evening… Bro. Munro was at that time Provost of Banff, and Bro. Auchinachie was Provost of Aberchirder. I feel inclined to mention this, as it is seldom that a strolling preacher like myself is driven by one Provost to be the guest of another.”